Examples of latest frauds we caught

The fraudster used a pharming technique, injecting malicious code into the victim’s computer, to acquire a customer’s e-banking credentials. The fraudster was then able to take over the customer’s account to seize a payment of CHF 19,990.

NetGuardians stopped the payment as a number of factors didn’t match the customer’s profile, including the new beneficiary (both at the customer and bank level), as well as the unusual screen resolution, session browser, and the amount.

Although the case involved a new client with little historical data, NetGuardians blocked the payment because the transaction was unusual at the bank level, and the beneficiary account was also unusual.

The customer, a victim of vishing, gave his/her e-banking credentials over the phone to the fraudster posing as an agent. The fraudster then took over their e-banking and transferred CHF 22,114 to an illicit account.

Although the case involved a new customer with little historical data, NetGuardians’ AI risk models stopped the fraud because the transaction characteristics were unusual at the bank level, as was the screen resolution.

The fraudster impersonated a bank agent and through social engineering persuaded the customer to release his/her e-banking login details. The fraudster took over the customer’s account and made a payment of CHF 33,170 to an account of their own.

NetGuardians’ AI risk models identified the transaction as fraudulent and blocked it because the e-banking metrics – e-banking language, browser, screen resolution, etc – did not match the customer’s usual profile.

The fraudster impersonated a Microsoft tech support worker and called the victim. Through social engineering, the fraudster managed to obtain enough information about the victim’s e-banking to transfer USD 7,500 to an illicit account.

A fraudster impersonating a banking agent persuaded a customer to disclose his/her e-banking login details through social engineering, took over the account and attempted a payment of GBP 21,000 to an illicit account.

The fraudster impersonated the CEO of the account holder’s company and over email convinced the victim to pay EUR 170,000 into an illicit account.

NetGuardians’ AI risk models stopped the transaction due to unusual variables including the beneficiary account and country, the operation type, order type, and currency.

A company employee fell victim to a business email compromise (BEC) fraud after their business partner’s email account was hacked and the fraudster sent a fake email from this account requesting a payment of USD 100,000 to a beneficiary in Peru.

The victim was advised by a fraudster impersonating a business partner to invest in a fictitious company and ordered a payment of USD 170,000.

NetGuardians stopped the transaction due to variables not matching the customer’s profile, including the unusual destination, beneficiary bank, beneficiary account, amount, and currency.

A customer fell victim to social engineering and was scammed on the purchase of a car. When the customer tried to pay a non-existent car company, NetGuardians solution stopped the payment before the money had left the bank.

NetGuardians blocked the transaction because of a number of unusual variables. These included an unusual beneficiary for the customer and the bank as well as the unusual amount and destination country.

The fraudster introduced himself to the victim as an American soldier based in the Middle East. A romantic relationship started and the fraudster convinced the victim to make three transactions to his bank in Germany – of USD 1,500, of EUR 3,000, and one of EUR 11,300.

Fraudsters manipulated internal accounts in one bank to send money to another bank, who are protected by NetGuardians. The fraud was detected in real time and the fraudsters were arrested while attempting to withdraw USD 500,000 (KSh 58 million) from the second bank’s ATMs.

NetGuardians AI risk models prevented the fraud due to the unusual timing and frequency of ATM withdrawals. After the detection of the fraud scheme by our solution, fraudsters were successfully caught by the police using the cameras installed at the ATM’s.

The fraudster impersonated a Microsoft employee and called the victim to say he had been hacked. The victim gave over control of his computer to the fraudster, who then planted malicious code and was able to transfer a payment of EUR 3,469 from the victim’s bank account to an illicit account in Slovenia.

A customer became romantically involved with a woman over the Internet, unaware she was a fraudster. She told him that her bank account was blocked but he could unblock it if he sent money to her account in Italy. So, he ordered the payment. NetGuardians spotted the fraudulent transaction and sent a real-time alert to the bank. The bank called the man setting out its suspicions and the transfer was not completed.

An IT administrator with back-end user privileges inflated account balances for an accomplice. The funds were then were ready to be withdrawn from ATMs and mobile banking but we detected the fraud before the money left the bank.

NetGuardians’ AI risk models spotted the internal fraud because the privileged user checked the account several times over a number of days, behavior the models picked up as suspicious.

A rogue employee exploited a misconfiguration of the core-banking system that allowed direct debit transactions to be posted on dormant accounts. The fraudster then attempted to withdraw the funds.

NetGuardians’ AI risk models spotted the fraud because the transactions did not match the customers’ historical profiles.

The victim received an invitation via a phishing email apparently from the government containing a malicious link. On clicking the link, the fraudsters were able to install a banking Trojan, add a new device, enter two payments and validate them through eBanking.

A bank customer received a call from someone impersonating a Microsoft employee. The fraudster convinced the victim to sign into his eBanking and subsequently took control of the account, initiating a EUR 18’000 payment to an account in Malaysia.

NetGuardians software detected and stopped the payment because a number of factors didn’t match the customer’s profile including the currency, the beneficiary, operation type and the beneficiary country. 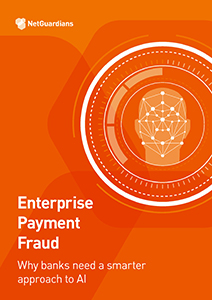 You may be interested in our eBook on Enterprise Payment Fraud:

Want to know more about our solutions or company?

Request a call Schedule a demo

To give you the best possible experience on the NetGuardians website we use cookies to collect personal information to better understand your preferences and improve the performance of our site. The Cookie consent button will remain visible until accepted; however by continuing to use this site, we will assume consent for cookies to be used in accordance with our Privacy Policy.

We may request cookies to be set on your device. We use cookies to let us know when you visit our websites, how you interact with us, to enrich your user experience, and to customize your relationship with our website.

Click on the different category headings to find out more. You can also change some of your preferences. Note that blocking some types of cookies may impact your experience on our websites and the services we are able to offer.

These cookies are strictly necessary to provide you with services available through our website and to use some of its features.

Because these cookies are strictly necessary to deliver the website, you cannot refuse them without impacting how our site functions. You can block or delete them by changing your browser settings and force blocking all cookies on this website.

These cookies collect information that is used either in aggregate form to help us understand how our website is being used or how effective our marketing campaigns are, or to help us customize our website and application for you in order to enhance your experience.

If you do not want that we track your visist to our site you can disable tracking in your browser here:

We also use different external services like Google Webfonts, Google Maps and external Video providers. Since these providers may collect personal data like your IP address we allow you to block them here. Please be aware that this might heavily reduce the functionality and appearance of our site. Changes will take effect once you reload the page.